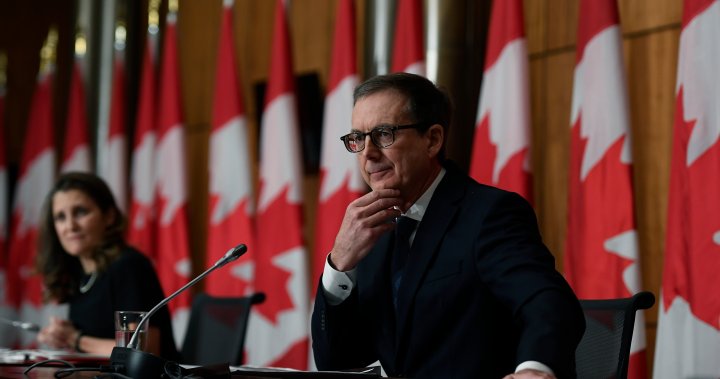 The wording of the Bank of Canada’s new mandate has changed, but its substance remains essentially the same, according to several economists.

Canadians can expect the country’s central bank to continue targeting low, stable and predictable inflation. And when it comes to the impact of low interest rates on the housing market, it will be up to the government – not monetary policy – to contain the spike in house prices.

Bank of Canada to maintain current mandate on inflation

At a joint press conference Monday, Finance Minister Chrystia Freeland and Bank of Canada Governor Tiff Macklem announced details of the new five-year term, the compass that will guide monetary policy decisions for the central bank until the end of 2026. While the Bank of Canada makes independent monetary policy decisions, every five years the federal government has a say in the overall framework within which the bank operates.

Under the new mandate, the Bank of Canada’s “primary objective” will continue to be to pursue an inflation target of 2%, as it has been doing since 1991.

The new framework also calls on the central bank to put a new emphasis on the labor market when evaluating its policy options. But the new twist won’t change much in practice, according to economists interviewed by Global News.

That’s because the new mandate doesn’t make full employment a second target for the Bank of Canada like it is for the US Federal Reserve. Economists define full employment as an ideal labor market in which anyone who wants to work can find a job.

“This is really a repackaging of the Bank of Canada’s current mandate in new candy wrappers,” says Avery Shenfeld, chief economist at CIBC.

The Bank of Canada’s approach to the housing market, where prices are affected by the cost of borrowing, will also remain the same, according to documents supporting the decision.

6:46
No short-term solutions to rising cost of living: former Governor of the Bank of Canada

No short-term solutions to rising cost of living: former Governor of the Bank of Canada

And the new mandate does not define what full employment is, says Chris Ragan, director of the Max Bell School of Public Policy at McGill University.

Ragan, along with other economists commenting on the new mandate on Twitter, expressed relief at the decision not to officially add full employment as a second goal for the central bank.

“People like me who think the central bank shouldn’t have a dual mandate argue that the central bank already cares about things like jobs and unemployment, the output gap and real GDP growth,” says -he.

“But the only thing (the Bank of Canada) can really have a sustained influence is inflation,” he adds. “So set the target on inflation.”

Politics is not responsible for inflation, says former Governor of the Bank of Canada

The central bank may, in some cases, need to keep its key rate “at a low level for longer than usual,” according to the documents.

But the way the Bank of Canada targeted inflation – at 2% within a range of 1-3% – was already explicitly flexible, notes Shenfeld.

“They weren’t trying to bring inflation down every minute of the day to 2%, but rather to bring the economy to a position of full employment where we could have, on average, 2% inflation,” adds he does.

The mandate renewal documents also mention that the Bank of Canada reports “systematically” to Canadians on how labor market impacts are factored into its monetary policy decisions.

This likely means the Governor of the Bank of Canada will have to spend more time explaining how variables like employment, unemployment and vacancy rates influenced his thinking when they first appeared on Parliament Hill, says Ragan. .

“I think that’s actually a good thing,” he said. “The more the bank can communicate… the underlying logic of its political actions to the Canadian people (the better). ”

What about the housing market?

While the brainstorming behind the new tenure led to a new focus on the job market, it didn’t include new thinking on the housing market.

Canada saw a record rise in home price appreciation during the pandemic, with national average home prices rising 18% in October from the same month in 2020, according to data from the Canadian Association of the United Nations. building (CREA).

Consistently low interest rates contribute to a booming housing market by making it cheap to take out a mortgage, which also increases household debt levels.

“A prolonged period of low interest rates could contribute to a build-up of financial vulnerabilities,” read the 74-page report supporting the Bank of Canada’s new mandate.

The value of Canadian household debt now exceeds that of the country’s GDP, and its relative size has doubled since 1990, according to the document.

Yet government policies are “better suited” than monetary policy to address these vulnerabilities, the document said.

“We haven’t figured out how to deal with rising house prices,” he adds, “but I would be the first to say that it’s not really a monetary policy problem to do that.”