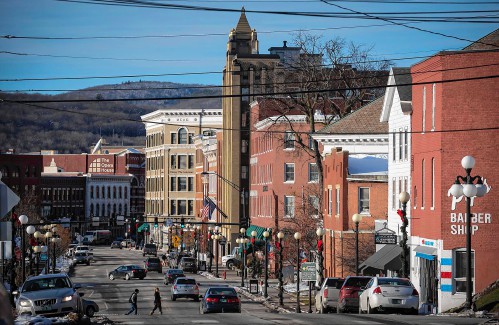 RUTLAND – Since 2018, Kaifa Dennis wanted to leave the Washington, DC, metro area where he grew up and attended college. He was looking for a slower life in a small town.

Rutland topped Dennis’ shortlist this year when he paid tribute to his great-great-great-grandfather, Martin Henry Freeman, with a bust on the Rutland Sculpture Trail.

Freeman was born in Rutland in 1826. He attended Middlebury College, and in 1856 became the first black president of an American college, the Allegheny Institute in Pittsburgh (later called Avery College).

Dennis, 43, wanted to get to know Freeman’s hometown better. He began to correspond with residents of Rutland, whom he found warm and welcoming.

The placement of the Freeman sculpture also signaled to Dennis that the city – which had seen complaints of racial incidents – was serious about enhancing diversity and inclusion.

“It was really attractive to me,” he said.

Dennis is one of dozens of out-of-state residents who have moved to the Rutland area in recent years. He moved to the city this summer with his miniature pinscher, Romeo, to lead his family’s efforts in establishing a scholarship in Freeman’s name. He rents an apartment while looking for a new job.

New arrivals are going against the grain in a region facing demographic decline. Between 2010 and 2020, according to the 2020 census, 688 residents left Rutland, reducing its population to 15,807, a decrease of 4.2% over a decade.

And they come for reasons ranging from the climate to the economy.

Los Angeles residents Enci Box, her husband, Stephen, and their three children also moved here this summer. After 25 years of living in the second most populous city in the United States, the couple wanted to get away from traffic jams, poor air quality and growing wildfires in California.

They were looking for a place close to nature, where their young could move around on foot or by bicycle, rather than always being transported by car.

The couple bought a house in downtown Rutland, where they are homeschooling their boys, Sydney and London, as little sister Berlin watches. Her husband runs a real estate business and rents local residential units.

In the four years they had lived in Fort Collins, a Colorado town at the foot of the Rocky Mountains, they saw the state become increasingly overcrowded. This meant not only more traffic, but also higher house prices and intense competition for good jobs.

As the couple enjoyed hiking and camping, they wanted to stay close to nature, but in a small town where accommodation was not as expensive.

The Osborne decided to move to South Wallingford, about 15 miles south of the county seat. Jackie Osborne works in a residential treatment center and her husband works in a solid waste treatment facility.

They rent an apartment, where they live with two rescue dogs, Rosie and Berlin. This is where Ausborne Osborne celebrated its 30th anniversary in November.

The decision of these households to relocate to the Rutland City area is good news for the Vermont municipality which has lost the most residents in the past decade.

The department as a whole is experiencing the same trend. Although the population increased in some municipalities in Rutland County between 2010 and 2020, especially ski resorts, the county recorded a net loss of 1,070 residents. The population fell 1.7% to 60,572 last year, making it the county in Vermont to lose the most people in the last population count.

The state, meanwhile, grew 2.8% to some 643,000 inhabitants. But that growth rate was below the U.S. average of 7.4 percent and the Northeast region’s 4.1 percent for the decade.

Rutland has maintained its position as the state’s fifth largest municipality, as it did in the 2010 census, but its population has been on a downward trajectory since 2000. Throughout the 1900s, it was the second largest municipality in the state. Vermont, behind Burlington.

The region’s population decline came with the shutdown of industries, such as marble and slate quarries, and manufacturing plants, as the opioid epidemic took hold.

In a double whammy, the birth rate fell as some young workers moved out.

He said the young workers headed for metro areas or the Sun Belt, referring to southern and western states, from Florida and Georgia to the Gulf states to California.

With advances in medicine and travel, Bove said, more and more elderly Vermonters are also spending much of their time in warmer regions, turning them into out-of-state residents. Those who are 65 or older make up almost 20% of Vermont’s population, making it one of the oldest states in the country.

And population loss recurs more as businesses and amenities disappear from affected municipalities.

“As populations decrease, they lose things,” said Peter Nelson, geography professor at Middlebury College, “and that can still lead to a downward spiral. “

In an effort to revitalize Vermont’s aging workforce, the state in 2018 offered remote workers $ 10,000 from out-of-state companies to relocate to Vermont. The money was intended to reimburse them for expenses such as moving expenses and workspace supplies.

The coronavirus pandemic, which hit the United States in early 2020, has sparked new trends in internal migration. In a desire for more open spaces amid the spread of the virus, city dwellers have moved to small towns, including those in Vermont.

But the Rutland area has attracted new residents for reasons other than security during the pandemic.

The Rutland Chamber and Regional Economic Development established a Janitorial Service in 2016 to help reverse Rutland County’s declining population. Thanks to local volunteers, the Rutland Red Carpet Concierge Service assists potential residents with the relocation process, such as finding accommodation, employment and a social group, even before they arrive. Its goal is to convert people in transition into residents of Rutland County.

Since its inception, according to the chamber, the concierge service has helped about 110 people settle in the department, including parents and their children.

The main reason adults gave for coming to the area was “quality of life,” said chamber executive director Lyle Jepson. He said it means a slower pace of life than in big cities, a lower cost of living and a life close to nature.

People who have moved to the Rutland area with the help of the concierge service come from all over the country. Most have relocated to Rutland City, including Dennis and the Box family. Some chose to go to Brandon, Danby, Killington, Poultney and Wallingford.

About half work remotely, while others are employed in healthcare, manufacturing, nonprofits or small businesses, said Kim Rupe, director of communications and community engagement at the bedroom. Most of the people who have moved since the start of the pandemic have been young professionals.

In addition to parents who have moved with their children, several families have taken in young people after settling in the area, Rupe said.

Rutland met all the demands the Box family were looking for in a new city, including a progressive political culture. One downside they saw was the lack of racial and cultural diversity.

These were important to the family, as Enci Box was born in Hungary and raised in Germany. Her husband is from Australia. She speaks Hungarian as well as German and French, which she teaches her children.

But Rutland’s lack of diversity was not a deciding factor for the couple, given the city’s proximity to cultural melting pots such as Albany, Boston and New York. Rutland is also not far from the Canadian urban centers of Ottawa and Toronto, where Enci Box has parents.

The key is for the family to travel whenever they can, said Enci Box, who worked as an actor before having children and who continues to dub for Hollywood films.

Having lived in Rutland for six months, Enci Box said she was disappointed that the city center was not as conducive to walking or cycling as she had hoped. She said the sidewalks, which also serve as bicycle lanes, are cracked in places, so her family still relies on driving to get around.

Considering Vermont’s rapidly aging population, Jackie and Austin Osborne wonder how easy it would be for them to meet people their own age. The couple hope to find a social circle over the months, especially after they get through their first winter in Vermont.

The state’s greater proportion of elderly residents could also be viewed in a positive light, Austin Osborne said. As workers retire, he said, jobs will open up for younger people.

Like the Osborne, Dennis noted the difficulty in finding a place to live in Rutland. He said rental properties were hard to find online, unlike homes for sale. He was finally able to find an apartment after two months of searching, with the help of the people of Rutland whom he met as part of the Freeman sculpture project.

This experience gave him the impression that the city was not very open to foreigners who came to rent.

“It was frustrating,” Dennis said. “Not everyone can buy a house.”

But he describes overall positive weather so far at Rutland. He noted the willingness of the local community to embrace a person of color and a relative stranger.

Dennis knew before settling here that Vermont is one of the least racially diverse states in the United States. The latest census shows that with 89.8% of the population describing themselves as white, it is the second whitest state in the country.

Dennis heard of some racial incidents in the area, but said that didn’t deter him from taking the plunge to Rutland.

“I had some concerns,” he said, “but I thought I should come and see for myself and make my own decision.”