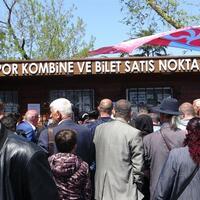 All eyes will be on the Black Sea province of Trabzon this weekend as the city’s population of 800,000 has already tripled with fans of the local football team flocking to the area from various parts of the countries and Europe to celebrate the next Turkish Süper Lig trophy after 38 years, locals said.

“All tickets for flights or intercity buses to the city are sold out,” Demirören news agency reported on April 26.

Trabzonspor, who lead the league with 76 points, leaving their nearest rival Fenerbahçe behind with an 11-point gap, will host Antalyaspor on April 30.

The team, known as the “maroon-blues”, only needs one more point to be declared the season champion. So a win or a draw is all the city needs.

Besides season tickets, some 12,000 tickets for the match between Antalya were sold out in just 10 minutes last week.

“Trabzon is preparing for a long-awaited carnival. There is an influx into the city of football fans and people who are from Trabzon but live outside the province and abroad,” said Nihat Yılmaz, board member of the Association of Trabzon Agencies. Turkish Travel (TÜRSAB).

The last time Trabzonspor won the cup was in 1984.

The demand to reach the city and celebrate the upcoming championship is so huge that airlines have had to increase the number of daily flights to the city from 15 to around 45 with additional trips.

“Many fans, who could not find plane tickets directly to Trabzon, flew to the airports closest to [the Black Sea provinces of] Giresun, Samsung and [the eastern province of] Erzurum to reach the city by land,” Demirören news agency reported.

According to fans, the city is already ready to celebrate the trophy.

“We are proud and excited. Only a few more days,” said Oğuz Şişman, a Trabzonspor fan. “There are even people who are not Trabzonspor fans but come to town to join the crowd in the championship celebrations.”

Mustafa Uçar is a ‘Trabzonspor maniac’ from Germany who came to the city to watch his team play two months ago.

“The atmosphere in the stadium was so good that I decided to stay for the championship celebrations,” he said. “My wife and children will accompany me to the stadium for the league game on April 30.”

However, the best plane tickets they could find were those to Giresun, a province about 130 kilometers from the center of Trabzon.

“What Trabzon is going through is an unusual situation,” Mani said.

When asked what a trophy after nearly four decades means for Trabzon, Mani stressed: “The city will be reborn.”

Besides, the city could see a ‘surprise first’ late on April 29 when Fenerbahçe play Gaziantep FK.

If Fenerbahçe lose a point, then Trabzonspor will automatically be champions before April 30.