A new North Dallas campus is the latest sign of the Texas A&M university system’s reach in the region, even as another is in the works for the region.

The site unveiled Wednesday is an extension of Texas A&M-Commerce and aims to make higher education more accessible and affordable for students in the region, officials said.

“We’ve wanted to do this for a long time,” said Texas A&M System Chancellor John Sharp. “Every time we looked at the Metroplex, we were looking for ways to expand.”

The Dallas expansion, announced in March of last year, adds to the list of cities that have an expanded A&M-Commerce site, including Frisco, McKinney and Mesquite.

The new space – consisting of approximately 50,000 square feet – will allow local students to pursue studies at a significantly reduced price by waiving the cost of accommodation and meals, officials said.

The university began holding classes in the new space in November and has about 400 students taking classes there.

“I’m in love with the new facility,” said Hannah Escobedo, a visual communications manager. “There are a ton of new resources.”

Although it lives in commerce, the university has a shuttle system that brings students who live in more rural areas to the city for classes at the new Dallas site.

Most course offerings at the Dallas site will be in education and business, which officials say is based on feedback regarding the needs of the local community.

Since the area is a hub for various school districts, the new campus will also allow A&M-Commerce to increase opportunities to enroll more high school students in college, said Linda Griffin, administrator of the Garland School. .

Various other departments – including those of agriculture, humanities, social sciences and arts – will also offer programs at the institution.

The space, located at 8750 North Central Expressway across from the NorthPark Center, is on the top two floors of a building that also houses the headquarters of Topgolf and Match Group, which owns various online dating services.

Bill Mahomes, vice chairman of the Texas A&M University System board of trustees, said he hopes people who walk past the building see the school sign “as a beacon for a brighter future for generations to come.” to come”.

“We believe that a high-quality, affordable education should be within reach of anyone motivated to seek it,” Mahomes said.

The Texas A&M System recently announced plans for a new campus in downtown Fort Worth. This site is expected to include a research and innovation center next to a new education alliance building, which would host conferences and courses.

Officials expect to innovate this summer. 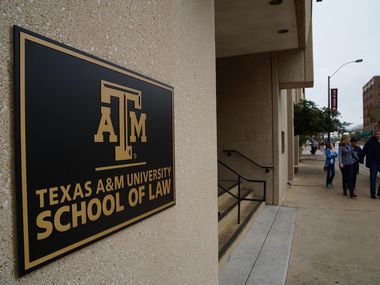 The DMN Education Lab deepens coverage and conversation about pressing education issues critical to the future of North Texas.