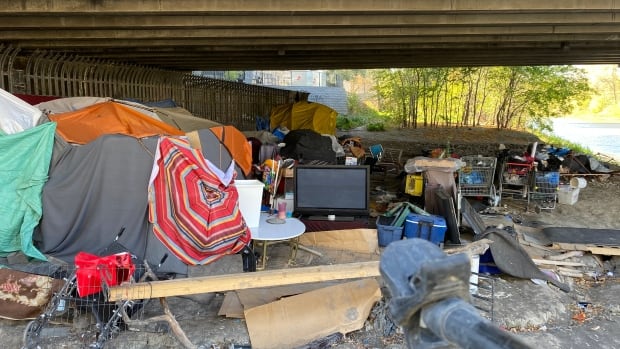 More than 1,000 people in Winnipeg were homeless in a 24-hour period earlier this year – and Indigenous people continue to be overrepresented in Winnipeg’s homeless population, according to a new report.

“The report confirms what was observed by many community organizations and residents of Winnipeg during the pandemic: increased visibility of unprotected homelessness,” said Kristiana Clemens, manager of community relations with End Homelessness Winnipeg, who coordinated the Interim report of the 2021 street census, published Tuesday.

“And of course, the trend continues to overrepresent Indigenous people in homelessness.”

For the latest report, 1,127 people with different levels of homelessness were counted by various methods during a 24-hour period on April 21 and 22.

New report says one-third of the people counted in the census – 370 – were homeless people living in parks, bus shelters, driveways and vacant lots, and without access to emergency services .

At the last street census – realized in 2018 – the proportion of homeless people was less than 15%.

However, End Homelessness Winnipeg warns that due to the pandemic, the 2021 results cannot be directly compared to more robust efforts in 2015 and 2018, which involved hundreds of volunteers deployed across the city.

Pandemic health rules and concerns about gatherings presented challenges in assessing the extent of the problem in this year’s investigation.

Manitoba’s pandemic response system was at an all-time high – red or critical – when the 24-hour census was taken. Staff from 15 different organizations collected as little information as they could.

Organizers say the report still offers valuable insight into the challenges people face without a permanent place to stay.

The census counted 300 people in four emergency shelters, as well as 229 in 24/7 safe spaces, 174 in transitional housing and 54 observed in various settlements across the city.

The apparent drop may not capture the full picture of what is happening on the ground, according to one of the organizations that participated in the report.

This is in part due to the “hidden homeless” – people who have temporary shelter, but do not necessarily stay long in one place – or the dynamic nature in which some populations move seasonally in the city, a she declared.

In Saint-Boniface alone, where Willis says homelessness has increased, Street Links workers can meet 20 people a day and nearly 70 others in the same area.

There are more tent camps than ever before, and they’re spread out further around town, which amplifies the challenges of prospecting all known locations in one day, Willis said.

The 24-hour census format has always faced these challenges, she said, and the addition of pandemic restrictions has further complicated the efforts.

“It’s really hampered, I guess, by the limits placed on our outreach teams – their ability to really go out and make contact in our vast areas of coverage now,” she said.

Willis would like to see a shared database that outreach organizations could update more frequently throughout the year with demographic information.

Despite its limitations, the report suggests some general trends in the city’s homeless population.

Nearly half of people using emergency shelters and transitional housing were between 25 and 49 years old, according to the report, and at least two-thirds were Indigenous.

This continued overrepresentation of Indigenous peoples is linked to the legacy of residential schools, the Sixties Scoop, child welfare issues and inequitable funding, said Clemens.

This indicates a need for more Indigenous-led housing solutions, she said.

“The fact that we have not made progress in reducing the overrepresentation of Aboriginal people in homelessness in the downtown area is a testament to the overall lack of progress in our efforts towards reconciliation. “

About 70 percent of those counted in shelters, transitional housing and safe spaces were men, while more than 27 percent were women. More than one percent were people of various genders, according to the report.

Almost a quarter (22%) encountered in these spaces were unaccompanied young people aged 24 or under. A similar proportion of adults aged 50 to 64 was also observed.

The 2018 census found similar percentages of parents with children, Clemens said, but it indicates little progress has been made in the intervening years.

“It’s heartbreaking,” she said. “We believe there are safe places for families to raise their children and yet we find this cohort of families who have no place to call home.”

More flexible options are needed for those who are used to living in camps and who may be reluctant to accept traditional accommodation at first, Simcoe said.

“If we had housing available for them, we knew they wouldn’t lose… somehow with no strings attached, [then] they may take a while to get used to the idea, ”he said.

Clemens said the supply of low-income rental housing in Winnipeg actually declined during the pandemic.

She hopes the report will serve as a call to action to advance housing solutions.