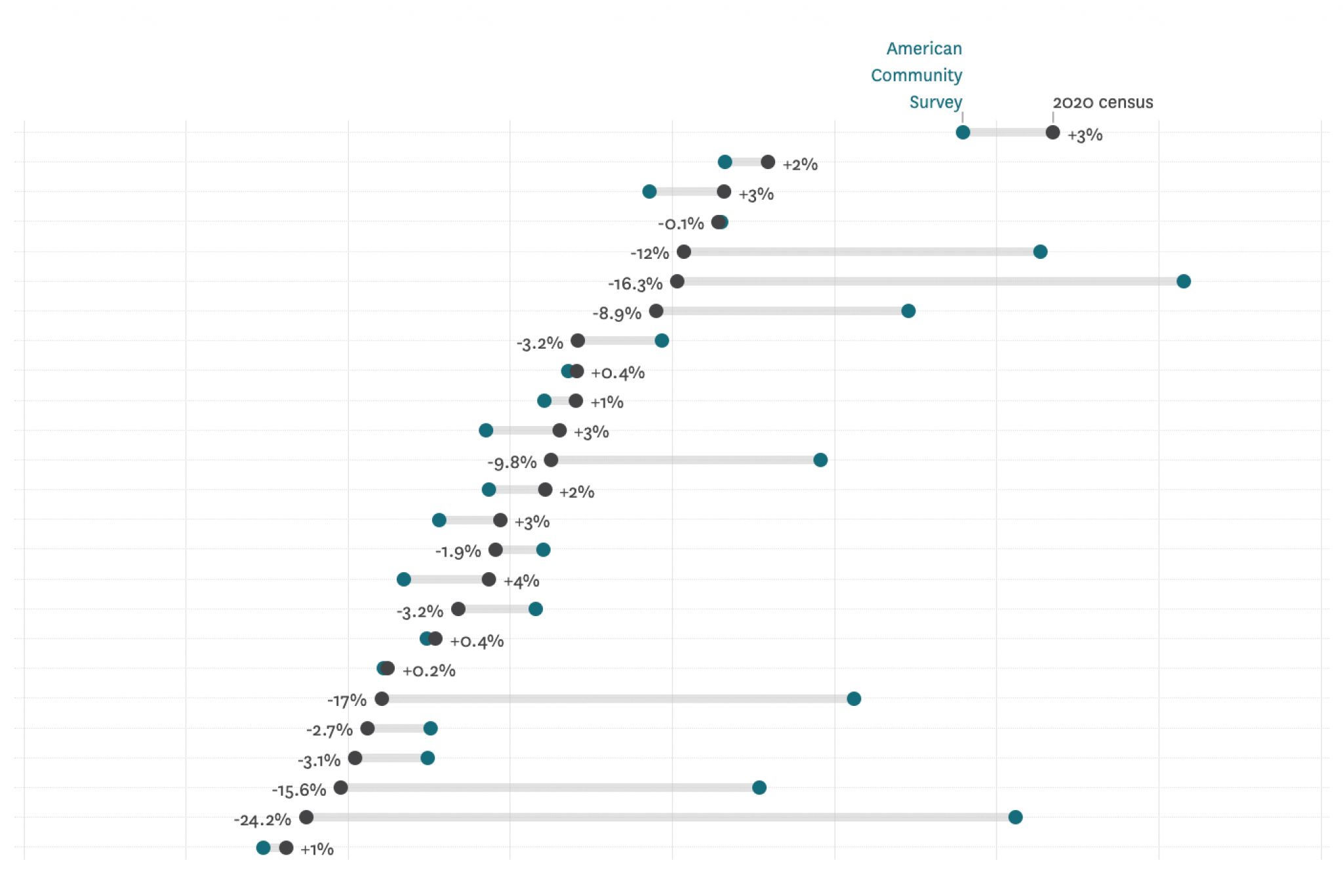 If you look at data from the San Francisco Department of Public Health on neighborhood immunization rates, Mission Bay appears to be ahead of the curve. Nearly 91% of the 13,222 estimated inhabitants of the district are fully vaccinated, according to the department.

But if you incorporate the latest demographics from the 2020 U.S. Census, the picture changes dramatically. Only 69% of Mission Bay’s estimated 17,432 residents are fully immunized, which is below the city average.

Indeed, to calculate coronavirus vaccination and case rates by neighborhood, the Department of Public Health used estimates from the American Community Survey, or ACS. Among other things, the ACS uses data on new housing, births, deaths and migration, as well as population counts from the previous decennial census, to estimate the average population of a region over five years – or 2015 to 2019 for the 2019 ACS five-year estimates. It is these 2019 numbers that are currently used by the San Francisco Department of Public Health.

The decennial census is generally considered more accurate than the ACS at estimating populations because it is an attempt to count every person in the United States, rather than providing an estimate. But that only happens once a decade. So, during most of the pandemic, the ACS number was the most up-to-date population estimate for neighborhoods in the city.

But in August, the Census Bureau released detailed demographics from the 2020 decennial census, which the Chronicle used to derive new population estimates for each neighborhood in San Francisco, as defined by the San Francisco Planning Department. Population figures to date produce a picture of San Francisco’s vaccination rates that, in some cases, deviates significantly from the figures currently used by the Department of Health.

That being said, the Bayview has by far the highest case rate of any neighborhood. More than one in 10 residents has tested positive for the coronavirus since the start of the pandemic.

Of course, the decennial census population counts aren’t perfect, even in an ordinary year – and last year was anything but. The pandemic-induced migration of San Franciscans in and out of town may have changed the populations in his neighborhood during the population count period. Most demographers also agree that the 2020 census likely underestimated blacks and Latinos.

Still, the 2020 population figures are likely to be more accurate than the 2019 ACS estimates. And these differences could mean that the department has significantly underestimated or overestimated vaccination and case rates in various neighborhoods. of San Francisco.

Kirsten Bibbins-Domingo, chair of the Department of Epidemiology and Biostatistics at UCSF, said the discrepancies between case and vaccination rates based on different population estimates indicate a well-known data problem among epidemiologists, what she calls the “denominator problem”. This refers to the idea that experts can use rough or inaccurate population estimates to calculate disease rates for a community in emergency situations – in this case, during a time of immense social upheaval with high levels of social upheaval. potentially large population fluctuations at the neighborhood level.

Bibbins-Domingo added that the “denominator problem” may have changed the way San Francisco public health officials understood the prevalence of immunization in the city, and therefore the way they targeted their outreach efforts to the city. the vaccination. For example, Bayview’s higher vaccination rate might have led these city officials to believe that the neighborhood’s population – which is nearly a third of Blacks, a high-risk demographic – were more vaccinated than they were. really is.

She added that providing San Franciscans with accurate case and vaccination rates by neighborhood can help inform their decision-making regarding activities of daily living.

But Bibbins-Domingo said that while ACS 2019 population estimates are not perfectly accurate, they have been available since last March and have remained consistent over time. So at least they have allowed public health officials to measure progress in neighborhood-level case and vaccination rates since the start of the pandemic.

“The best denominators help you think about comparisons between [groups], “she said.” But for each of them, a stable denominator can help you know if you’re improving over time. “

These discrepancies also exist only at the neighborhood level: at the city level, the ACS San Francisco population estimate for 2019 is down by less than 0.1% from the census. of 2020. So, regardless of the population count, as of September 29, the overall cumulative case rate in San Francisco was approximately 550 per 10,000, and its vaccination rate was 78%, or more than 22 % more than the whole of the United States.

The SF Department of Public Health did not respond to a request for comment at the time of publication.