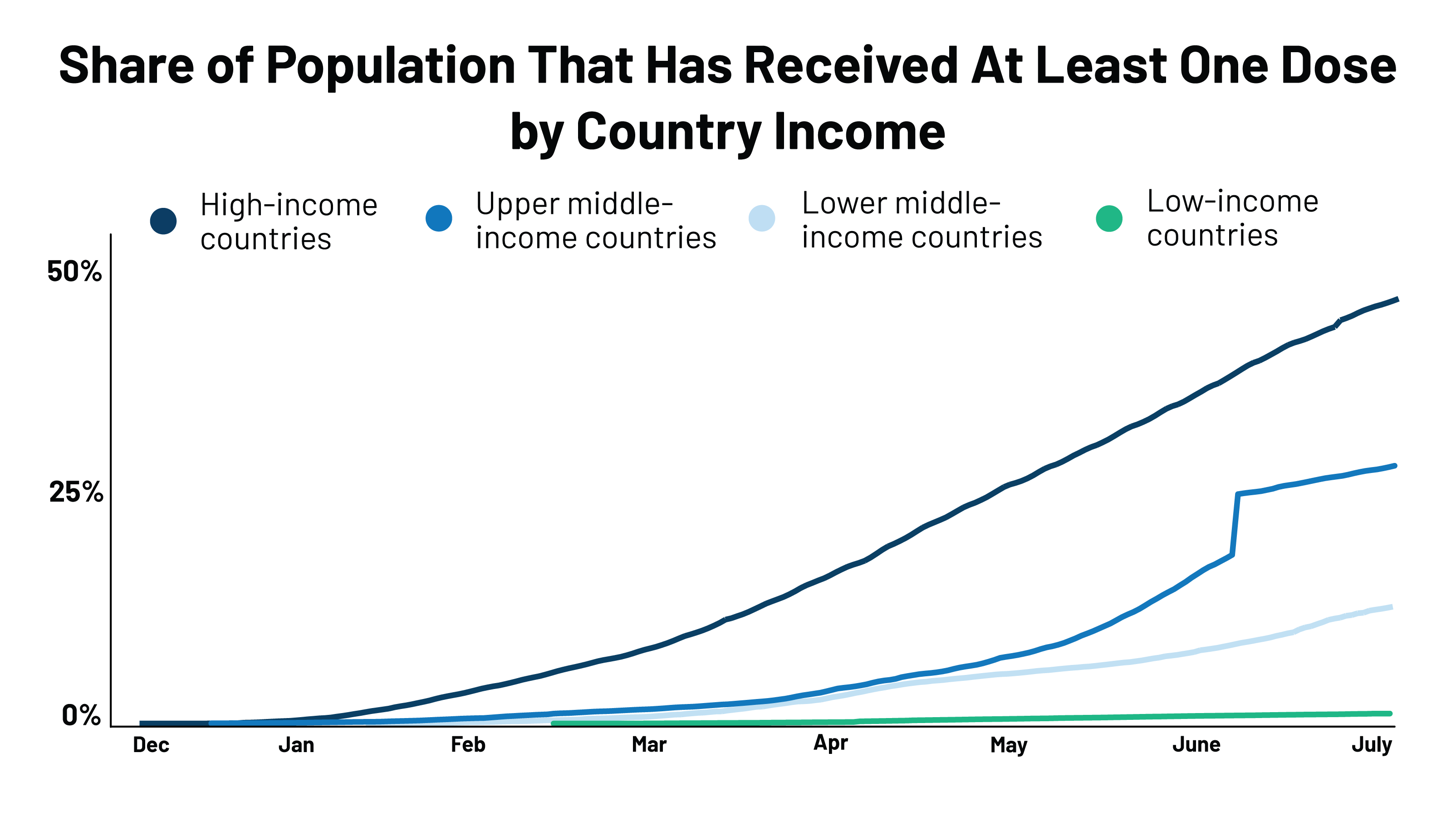 As of July 7, 2021, of the estimated 3.3 billion doses of COVID-19 vaccine administered globally, most have only been delivered to a small number of countries. For much of the world, especially those living in low- and middle-income countries, COVID-19 vaccines remain out of reach. While international efforts, such as COVAX and supplementary vaccine donations, aim to increase global access to vaccines, several estimates suggest that many countries may not achieve substantial immunization levels until at least 2023.

Building on and complementing existing efforts that track global vaccine access, such as Our World in Data, the Launch and Scale Speedometer, and Bloomberg’s Vaccine Tracker, we are examining several measures of global vaccine equity in order to ” assess where the biggest gaps are and whether they are narrowing or getting worse. More precisely, we group the countries by Income and by Region and look :

Based on the current rate of vaccine doses administered, we also estimate by how much the rate should increase to meet the global immunization coverage targets set by the World Health Organization, the World Trade Organization, the International Monetary Fund. and the World Bank: 40% coverage by the end of 2021 and 60% by mid-2022. We do this at the country level, and for countries by income group and regional classification.

As we see here, there are large disparities in access by income and region (especially when these overlap), with low income countries (LICs) in particular falling far behind, followed closely by Lower Middle Income Countries (LMICs) and Africa lags behind all other regions. If current rates continue, most low-income countries and most countries in Africa are not on track to meet global immunization targets.

COVID-19 vaccinations by country of income

Three countries (China, India and United States) account for the majority (57%) of all first doses administered worldwide. When removed, the difference between high-income and middle-income countries becomes even more marked, with high-income countries still well ahead of other income groups in terms of the proportion of the population receiving at least one dose (see Figure 3). See Table 1 for the full list of countries in each income group per share of population that received at least one dose.

Likewise, there is also a large gap in the rate of vaccine administration according to the country’s income. While the daily rate of first doses administered varies from country to country (see Figure 4), HICs administered the first doses at a rate nearly twice the rate in LMICs and LMICs, and nearly 30 times the rate in LICs. See Table 2 for a breakdown of the top countries in each income group by coverage and daily administration rates.

Similar to income level, China, India and the United States are leading the trends in immunization coverage in their respective regions. For example, China accounts for 87% of the first doses administered in the Western Pacific, the United States 46% in the Americas and India 84% in Southeast Asia. By removing these countries, the differences between Europe and the Americas, the Western Pacific and Southeast Asia are greater (see Figure 8). See Table 3 for a breakdown of the top countries in each region by coverage and daily administration rates.

These findings highlight a persistent equity gap in access to COVID-19 vaccinations around the world, especially for those living in the poorest countries and countries in Africa. In addition, they suggest that if current rates continue, some of these disparities could widen and many low-income countries will not meet the global goals of immunizing 40% of each country’s population by the end. 2021 and 60% by mid-2022. Increasing vaccine supplies and accelerating the pace of immunizations in the backward countries can narrow the equity gap and help all countries meet COVID-19 vaccine coverage goals.