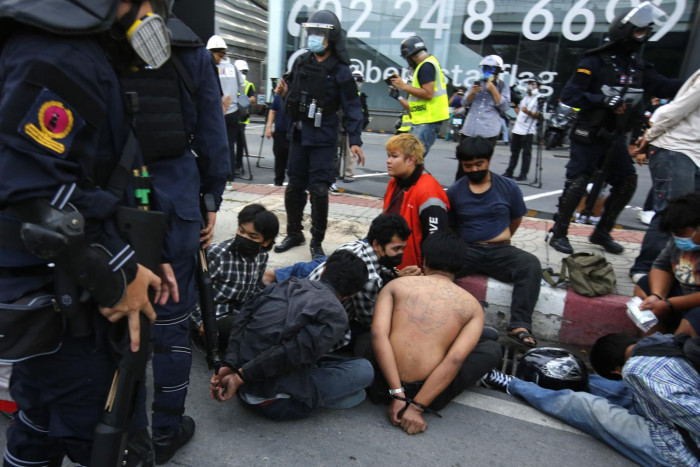 At least 35 protesters were arrested following a clash with riot police at the Din Daeng intersection as anti-government protests resumed late Sunday afternoon.

Young protesters on motorcycles who called themselves Mob Thalugaz (a mob that uses tear gas) began to gather at the intersection, which was the subject of rallies at 5 p.m. last week.

They threw ping-pong bombs and firecrackers as they walked towards the police who formed a security perimeter around the Royal Thai Army’s music department on Vibhavadi Rangsit Road.

The police stopped their progress by firing tear gas, causing a clash that left the exit lanes of the road, which lead to the Sutthisan area, impassable by motorists. To disperse the crowd, the police deployed water cannons and began to make arrests.

At least 35 protesters were arrested and their vehicles seized on Sunday. At around 6:15 p.m., the police were finally able to contain the rally at the Din Daeng junction and push the protesters back to Victory Monument.

The national police chief on Saturday ordered police to adjust their tactics to reduce the impact on neighboring communities, following complaints from residents near the protest site of rubber bullets and tear gas canisters ending up on their property.

Pol Maj Gen Piya said that while police have removed all shipping containers from the exit lanes of Vibhavadi Rangsit Road near the Din Daeng intersection and have reduced direct confrontation with protesters near residential areas, d Other adjustments will still need to be made to further reduce the impact on Din Daeng residents.

When asked if police plan to refrain from using tear gas and rubber bullets on protesters, he said their choice of crowd control equipment was standard for such operations.

Police are also coordinating with the National Housing Authority to strengthen the safety of residents of Din Daeng’s apartment, after suggestions were made to install netting to prevent thrown objects from injuring tenants.

He also said 13 anti-government protesters were arrested on Saturday in Nong Khaem district, where a large number of weapons, including 53 homemade bombs and catapults, were also seized.

They were accused of violating the emergency decree and gun laws, he said.

At least 259 people were arrested between July and August, and more than 500 will be prosecuted for their role in the protests.