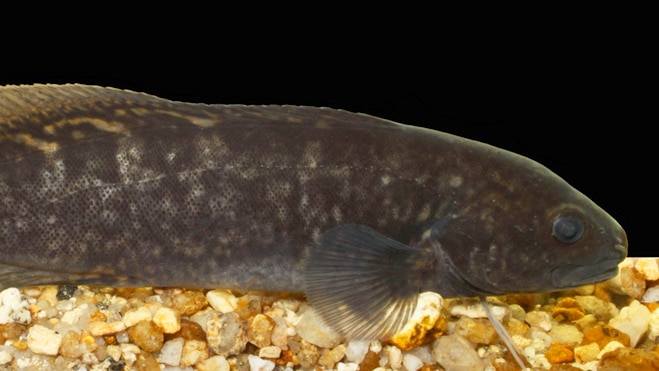 A small species of fish once caught in a bucket in Queensland’s Upper Condamine is on the brink of extinction.

Scientists fear that the North River blackfish – more commonly known as the nicky fish or long nicky cod – could be the signal for an environmental collapse in the Murray-Darling Basin river system.

The species, already very vulnerable to localized extinctions, is in serious decline.

Over the next two years, Southern Queensland Landscapes will attempt to reduce sediment and increase natural habitat in waterways where fish still live, notably in Killarney, upstream of the Condamine River in South Queensland. .

Griffith University researcher Mishca Turshwell hopes more people will learn more about the species as efforts to save it intensify.

“She’s an interesting little creature and, I think, definitely underrated and undervalued,” he said.

“But I hope that can make the public better know how cool they really are.”

No one really knows how many are left, but scientists at Southern Queensland Landscapes are convinced the species is in severe decline due to habitat destruction and declining water quality.

“They didn’t have a lot of money back then and fishing was part of the way to make ends meet.

“My grandma used to walk from Killarney to the kiosk to fish, but she caught a lot of nickies and crayfish and we used to swing our lines next to hers because she caught them all.

“They used to share them if they had too much, the fish was sweet to eat.

“But rivers would not be suitable now.”

The stream system is no longer suitable for swimming near Killarney due to the amount of silt in the water, according to Ms Petersen’s son Neil.

“There was a waterfall when I was a kid and I remember going there once for a picnic and there were adults taking the fish,” he said.

“I could see them coming down over the waterfall.

“There were some good pools up there when we were kids, but you couldn’t swim in them now – it’s so full of silt and everything.”

Indigenous elder Sam Bonner said his people drank in the streams near Killarney decades ago.

“They didn’t take care of the water, but how could they when they cut down all the trees? he said.

“They also cross streams all the time – they should put bridges in place so the tires don’t hit the water.

“The water is muddy and hot.”

‘Canary in the coal mine’

Dr Turschwell is not sure the fish can be saved.

“The black fish has sort of been described as a canary in the coal mine,” he said.

“They’re non-migratory species, so that’s a good indicator, because they don’t have this ability to move around and potentially find better habitat.

“Now they’re in decline, you know the system is in a bit of trouble. “

Dr Turschwell says the upper reaches of the Condamine are essential for maintaining the presence of blackfish in Queensland, if not in the larger basin.