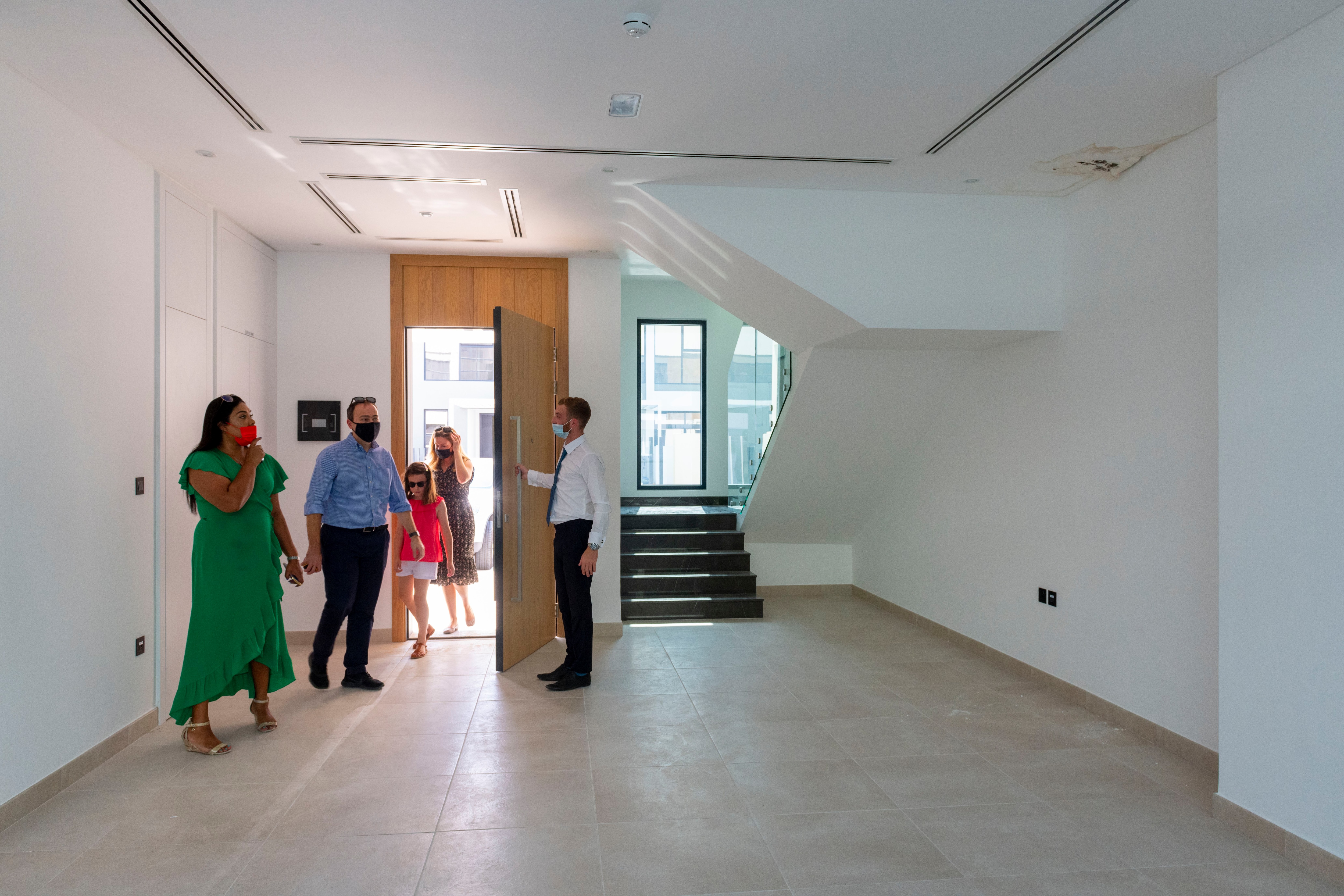 Related: Living in Dubai – the best places for families

Real estate agent Charlie Shetliffe has worked in Dubai for five years and has never seen the rental market so busy.

Customers are eager to take ownership of townhouses and villas – especially in the city’s desert suburbs – as quickly as possible.

The legacy of remote working is a major factor, with many professionals now dividing their workweek between office and home.

Mr Shetliffe has seen the cost of renting rise amid the economic recovery, which the latest industry reports confirm.

“I have never seen the market like this at any time in the past five years,” said Mr. Shetliffe, senior leasing consultant at Haus and Haus.

“We don’t even have to advertise properties online anymore because there are already so many people on the waiting list ready to go as soon as something becomes available. “

The National spent an afternoon with Mr. Shetliffe as he showed clients around the properties of Jumeirah Golf Estates in Dubai.

“We have recently seen a huge increase in the demand for villas and villa communities compared to apartments,” he said.

“This is in large part due to people working from home during the pandemic who wanted more space,” Mr Shetliffe said.

“Outdoor space, like a garden, is in greater demand than ever, as people felt cramped spending so much time in their apartments. “

While the rising cost of renting in Dubai is good news for landlords, it is obviously less so for those who rent.

Mr Shetliffe admitted it was difficult to strike a balance between homeowners trying to make the most of the boom in the market and future tenants hoping to find a new home on a budget.

“There’s no question it’s a homeowners market right now, but they still need to make sure they’re not too greedy and end up asking too much,” Mr. Shetliffe said.

“At the end of the day, tenants always have a budget that they can’t exercise beyond a certain point.

The cost of renting overall is on the rise, but the increases are much more modest when looking at the city average.

The average villa owner charged 14.1% more rent in the third quarter of 2021 than in the same period in 2020, while the average apartment rent rose only 2.6%. ValuStrat said average prices were significantly more affordable than during the surge seen in 2013-14, after Dubai won its bid for Expo 2020.

Jumeirah Village Circle (JVC) is the most sought after location in Dubai by people looking for budget apartments, according to a third quarter report from real estate portals Bayut and Dubizzle.

The average cost of a two-bedroom apartment increased by less than five percent in the second quarter compared to last year, to 62,000 Dh.

The increase in the cost of a one-bedroom apartment increased by just over one percent at JVC to 43,000 Dh.

Dubai Marina remains the most popular location for a luxury apartment according to the report, with prices increasing 6-12% overall.

Some regions have seen no increase in rental prices, such as Bur Dubai, where the average cost of one and two bedroom apartments is the same in the second quarter, at Dh45,000 and Dh66,000 respectively.

“The owners should not be too greedy”

Mr Shetliffe was showing three and four bedroom villas to potential tenants when The National accompanied.

He is also accompanied by an agent of the owner, hoping to make a deal and take the property off the market.

“Homeowners often have a lot of agents in their ears,” he said.

“I’ve been in a situation where the tenant offers to pay the asking price and you think it’s a done deal.

“Then, the next day, you are told that someone has come to offer more money. “

Another sign that the pendulum is swinging in favor of homeowners is a renewed demand for rent to be paid by an annual check, rather than numerous checks throughout the year.

It was not uncommon for some landlords to accept 12 monthly checks in recent years, allowing tenants to stagger rent payments throughout the year.

Not anymore, according to Mr. Shetliffe.

“Over the past few years, landlords were accepting multiple checks and some were offering a month’s rent free, which meant you would get 13 months for the price of 12 as an incentive,” he said.

“Now, due to demand, the number of checks per year is reduced.

Mr Shetliffe said there had been a noticeable increase in the number of people relocating to Dubai in recent months, which he attributed to renewed confidence in the region due to the successful handling of the crisis in Dubai. Covid-19.

‘A good community and a school nearby’

Newcomers like Leo Zambitte, a marketing manager who is moving from London with his wife and daughter, are looking for a villa in the suburbs.

“My business wants me to move here because we do a lot of business in the area and it’s easier to run it from here,” he said after being guided.

“We are looking for a place that is the right size for us with a good community and a school nearby.

“It has to be reasonable though, because we don’t want to go bankrupt. “

Another real estate agent said demand for townhouses and villas exploded during the pandemic, leading to an exodus of people leaving apartments to larger properties on the outskirts of Dubai.

“This has resulted in a reduction in the availability of townhouses and villas, hence the price increase that we are seeing now. “

Mr. Wilmot works in the Town Square community on the outskirts of Dubai on Al Qudra Road.

Renting a three-bedroom townhouse would have cost Dh80,000 last year. The same type of property is now going for Dh105,000.

“Out of 2,500 properties in our books, I would say we have four available right now,” he said.

The increase in rental costs is even higher in other parts of the emirate, Wilmot added.

“The demand we know in Damac Hills is exponential. A villa that I rented to a tenant last year for Dh185,000 was rented this year for Dh275,000, “said Conor Thompson, Allsopp and Allsopp.

“A lot of my clients are families who have moved to Dubai from the UK and Europe.

“With the market showing no signs of abating, I am confident that this demand will continue through the fourth quarter of 2021 and shows no signs of slowing down any time soon.”