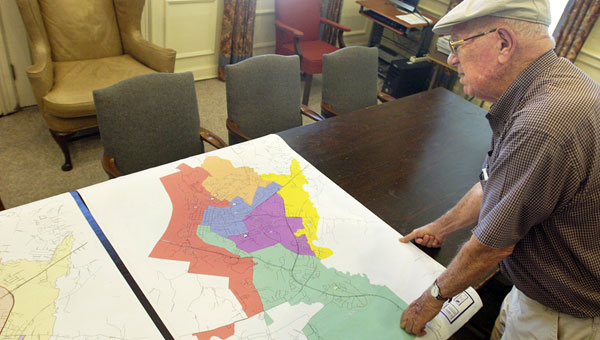 SHREVEPORT, Louisiana (KTAL / KMSS) – Local officials are urging voters in northwest Louisiana to get involved in the redistribution process due to the population loss recorded in the Census 2020 could affect their representation in everything from city and school districts to federal and state governments.

Census map: see if your county increased or decreased from 2010 to 2020

Every ten years, the state legislature must use the most recent data from the US Census Bureau for redistribution. The process involves adding or removing constituencies and redrawing constituency boundaries as necessary to match population measures so that each constituency has an “ideal” or fair number of voters. Under federal law, districts must have nearly equal populations and must not discriminate on the basis of race or ethnicity.

“It’s alarming because it affects the number of reps we can have for the number of people. We are now in danger of losing; we could possibly lose a seat based on those numbers.

While Louisiana has retained its six seats in Congress, population shifts will also likely require boundary shuffling to balance population across districts. District 4, which includes northwestern Louisiana and the western part of central Louisiana, has lost about 27,200 residents over the past decade. It is one of the three in the state that will have to expand its boundaries to comply with the requirement of equality of the population.

Phelps thinks not everyone understands the importance of returning the census form for an accurate count.

“I don’t think they knew how it affected [them], and it’s just something that we’ll have to do a better job of for the next generation in the next ten years.

“We know a lot of people have left our area, and we know it’s because of the lack of better jobs, better opportunities, and a lot of it is crime,” said Caddo Dist. 7 Commissioner Stormy Gage-Watts.

In another significant population shift following the 2020 census, blacks now make up a larger share of the population of Caddo Parish than in 2010 and now constitute the plurality.

Now Gage-Watts, Phelps and others want to make sure the public understands the importance of weighing in when it comes to redrawing district lines based on the new numbers. They recently held a community meeting to review next steps to ensure appropriate representation in each district – including attending an upcoming public hearing held by the Joint Government Affairs Committee of the Louisiana Legislature to inform the map drawing process.

The public hearing, scheduled for 5:30 p.m. to 8:30 p.m. on Tuesday, Oct. 21 at LSU Shreveport, is the second in a series the committee is scheduled to hold in communities across the state. The premiere will take place on Wednesday, October 20 at the University of Louisiana at Monroe.

“This is going to determine who they vote for, where they vote for, and even when it comes to community funding and the things your community says are important to them,” said Candice Battiste, organizer in northern Louisiana for the. Power Coalition for Fairness and Justice. “You want to make sure you have someone who listens to everyone in this community. “

The Louisiana ACLU is also planning to organize a Fair Maps for Louisiana meeting Tuesday, October 19 to help citizens prepare for the public hearing on the redistribution of the legislature.

The Legislature will convene a special legislative session in February 2022 to iron out its redistribution plan, which is due to be completed by the end of the year. Governor John Bel Edwards has the power to veto any proposed parliamentary and legislative district map, and the US Department of Justice is expected to review all redistribution plans to ensure compliance with human rights law. vote.

Download the ArkLaTexHomepage app to stay up to date with the latest news, breaking news, weather, sports and more!